Hodge is a 5th grade science teacher at Wheeler Middle School. She has taught at Wheeler since 2018 and has been an instructor with OKCPS for the entirety of her career. Hodge is known for her passion for developing students as “whole learners” and approached the challenge of the recent school year with excitement and tenacity.

“I am beyond honored to get to be part of future doctors, scientists, artists, musicians, and their educational journey, hoping that what they learned within our four walls, they bring with them into the world,” Hodge said. “With every student I have taught, I am convinced their hearts and minds are ready to make this world a better place, and they will do it!”

As the Teacher of the Year, Hodge received a cash award from The Foundation, a watch from BC Clark and the use of a brand new car for one year from Fowler Automotive. She will represent the district in the Oklahoma State Teacher of the Year competition.

“It is our honor every year to recognize our district’s amazing teachers,” said Mary Mélon, President and CEO of The Foundation for Oklahoma City Public Schools. “Teaching is a challenging profession all the time, but given the challenges of teaching during the pandemic, we’ve seen our teachers step up and innovate to engage their students in all new ways.”

The nine finalists for this year’s award were selected from the district’s site teachers of the year, who were also recognized at the event. The finalists included: 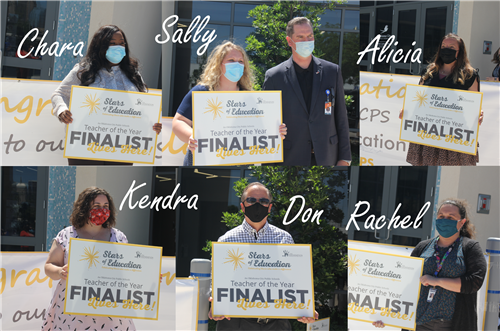 The Foundation for OKCPS also recognized Armando Ayala of Shidler Elementary and Jeanne Ambriz of John Marshall Enterprise High School, winners of the Sam and Charolet Outstanding Principal Awards. Each principal received a cash award plus $1,000 to use toward Partners in Action projects at their schools.

The Foundation awarded three Partners in Action Community Partners of the Year:

The Valuable Volunteer and Super Support Staff winners were also recognized during the event. Alicia Faye & Kris Goforth, Brian McKinney and Jane Sutter were honored as this year’s OKCPS Valuable Volunteers and their schools will receive a $500 award to use towards a Partners in Action project. Anna Kennedy, Principal’s Secretary and Registrar at Putnam Heights Academy, Galen Smith, Teaching Assistant at Arthur Elementary, and Stephany Meister, Parent Liaison at Wilson Elementary, were named Super Support Staff honorees and received a $500 cash prize from The Foundation.

Dr. Sean McDaniel also expressed his pride and appreciation for the educators honored at the event.

OKCPS is blessed to have incredible educators and partners -- especially those honored today who have provided the care, connection and consistency our students and families needed most over the past year. It is their passion and creativity that continues to inspire all of us. So, on behalf of the entire district and our friends at the Foundation for OKCPS, I send our deepest appreciation and heartfelt congratulations to each of you for the difference you make in the lives of our kids each and every day. We are so lucky to have you as part of #TeamOKCPS!"