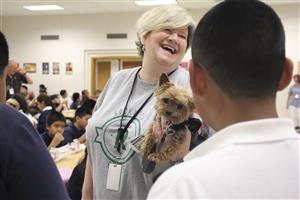 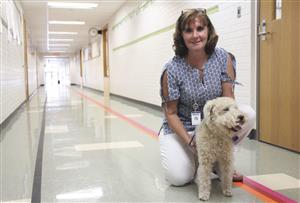 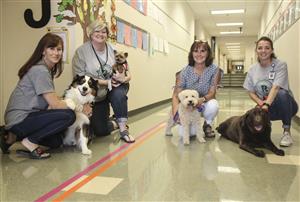 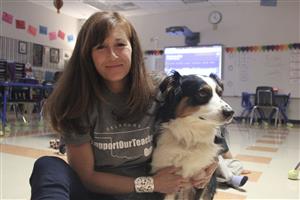 When did the school began to have therapy dogs on site?

“Jake started at Rockwood 2 years ago, he is now starting his third year as a therapy dog at Rockwood. Bug and Hershey started last year, so 2018-2019 is their second year as therapy dogs.”

How often do the dogs visit Rockwood Elementary?

“Each of the dog averages two days a week depending on the school schedule, meetings or trainings we have outside of the building.”

Why did you decide to have therapy dogs at the school?

“I attended a state administrative training held by the SDE and went to a workshop by Mutt-A-Grees, which is a counseling program.  I started doing research about the use of dogs in schools for behavior and emotional support.  After talking to our former Superintendent about it, I decided to try it with my own dog, Jake.  We worked with K-9 University to do his training and then I enlisted him with the National Service Animal Registration.  The students really liked him since day one and it just took off from there.”

Have Jake, Bug, and Hershey had a positive impact on students?

“At first, Jake was a novelty and was used for reward situations. He was also a tool to draw students out when they would not talk because they were sad, scared, or angry. This was when it dawned on me how truly useful he could be.  He also had a strange way of defusing angry parents. Sometimes we would have parents come in upset about something and as soon as they came in and saw Jake they would smile and start petting him. We would chat about him for a couple of minutes then get back to the original concern, now in a calm manner. Bug is used very similarly.  Jake and Bug deal with more emotional or behavioral matters.  When Hershey came along, we implemented a new activity: students could make appointments to read to her. Since then, we’ve seen an increased circulation in the Media Center and kids are more engaged with reading.”

Have Jake, Bug, and Hershey received training and certifications to become therapy dogs?

“All three of them have attended training and have certifications.  Only Jake is registered as a service animal.  We have filed their training certificates with the district and we file their vaccinations each year.  We also introduce the dogs to the parents at the beginning of the year meetings (Meet the Teacher and Open House), so parents can meet the dogs, ask questions, and learn why we have them as part of our staff members.”